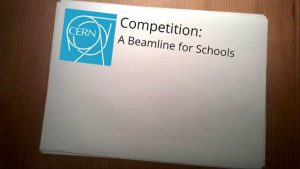 CERN is offering high-school students from around the world the chance to create and perform a scientific experiment on a CERN accelerator beamline. What better way to learn about physics? Now in its third year, the Beamline for Schools competition is open to teams of at least 5 students aged 16 and up with at least one adult supervisor, or “coach”.

Are you interested about the current edition and the work of the two winning teams on the Beamline? Check out the “Current and past editions” box to get news about that!

Are you interested about registering for next year’s competition? Find out about the beamline and facilities on this website and go through the useful documents for detailed information! Finally, think of a simple and creative experiment and submit your written proposal as well as your short video between October 2016 and the 31st of March 2017.

Previous winners have tested webcams and classroom-grown crystals in the beamline, others have studied how particles decay and investigated high-energy gamma rays. What would you do? Check-out the video of the 2015 winners who came at CERN to perform their experiment!

This site uses Akismet to reduce spam. Learn how your comment data is processed.